Following on from a week of postings on.

The law of color as it relates to hair colouring.

The Ph scale and the chemistry of hair.

The dyes lift the hair natural pigment and deposit a new artificial colour at the same time. Working in conjunction with our chosen developer as the lifting process starts. We lighten the hair thus exposing natural lightened pigment as our chosen developer or hydrogen peroxide lifts the hair lighter, so more pigment is exposed this pigment becomes part of our colour equation.

With all hair colouring the key to success is Formulation, application and timing.choosing the incorrect shade can cause issues as can using the wrong strength of developer. Its a fine balance.

The different strengths and uses are as follows:

*5 Vol less no lift only works with the artificial pigment molecules.

*Will only expose the pigment at the given level. zero lift from level to another.

* suitable for tone on tone or darker.

* can be used fro toner deposit on pre- lightened hair. i would consider using a demi application in this instance.

*Covering some examples of Grey hair.

*Refreshing a tint, again i would consider a demi application for deposit only.

* Will produce one level of lift. That being for example lifting through level 6 exposing pigment expected at a level 7 [ see colour wheel]

* 2 to3 levels of lift . That being for example lifting 6 to level 8 exposing pigment at that level.If confused about three level 6 to 8 consider it has to lift through the pigment at level 6 before exposing the pigment and a level 7 and finally through level 8. see chart below count off level 6 to 8?

3 to 4 levels of lift,the same rule applies as above.  expecting anything other than a high level lift formulation will not achieve lift from a level 6 to10. amount of lift and pigment exposed will always be an issue in this instance. think 6 to 9!

In some cases a high lift blonde formulation can achieve desired lift this is due to the following.

* For high lift blonde formulation. The mixing ratio normally increase the ratio of hydrogen peroxide in the formulation to 1 part colour to 2 parts developer always check the product you use for directions. they can also in some cases have other chemical properties added to aid in the lift and deposit needed to reach target colour.

*High lift blonde shades. Normally have a more concentrated amount of pigment to work with the pigment exposed in the lifting process depending on choice of shade. They also have a longer process time due to level of peroxide being used to attain this degree of lift.

It is always worth considering lift required and in some cases a bleach lightener / decolourizer may be required to attain desired degree of lift.

So as an example lets look on the chart at undertone orange {orange as we know is made up of red and yellow} So to bring balance to a natural level 7 we would add a corrective Blue Tone! cool ha.

Hydrogen peroxide will only release the oxygen molecule required when in an alkaline state this is why oxidative dye products require the presence of ammonia or some other alkaline some derived  from a natural sauce. [making them herbal]. This returns the hydrogen peroxide to its natural alkaline state and allows it to release oxygen freely.  The ammonia also acts as the engine drawing the colour under the opened cuticle helping it penetrate the cortex where it becomes fully developed. 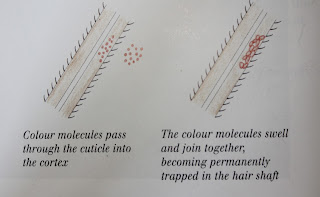 The Hydrogen peroxide in the formulation is lightening the hairs natural melanin whilst at the same time the oxygen released is swelling the artificial pigment within the cortex and hair shaft trapping it deep inside the hairs structure.

We did say this was quite a big topic, it would be a long journey.

problems that can arise from permanent colour normally due to over processing. Damage to the cuticle it becomes raised cannot retain colouur [P/h issue].

Lack of moisture due to heat styling/exposure to the sun and element such as chlorine .wrong formulation, excessive colouring,

Lack of Grey coverage is normally a formulation and timing issue. poor assessment in the consultation process of amount of Grey so amount of N series required in formulation.

wrong choice of developer, correct development time. wash of to soon dye molecules that have not had time to develope and bond are washed away.

Hair that is resistant to colour closed cuticle very resistant Grey hair. Pre-soften  with a formulation using either Demi lotion or 10 vol with natural level N series. leave for 20 minutes wash off with cold water, before apply target formulation.

The advantages of permanent colour.

*100% of Grey or white hair with correct formulation

*soften or pre pigment hair,can add texture due to a more open cuticle.

Finally in closing this section in the consultation process it should be explained to clients their expected commitment when choosing permanent colour. My advise would always be chose the path with the least chemistry as possible to start with.

*Roots will need re touching between 4 to 6weeks,

* colour can fade on damaged or over processed hair. colour balancing is key to colour pigment retention.

*Danger of allergic reaction Always do a skin test. prior to any chemical service.

Colour balancing is required to refresh colour that is being re touched, The formulation on the root or re growth will be different to that required for the previously coloured mid lengths and ends both in choice of shade and developed used. 0 lift on pre coloured area!

Take a break digest remember it’s a lot to take in digest understand.

These have a arrived in recent years with a fan fair of hype marketed as being. Ammonia free, all natural,conditioning.  bla bla bla!  sorry only my opinion but as we have discussed an alkaline has to be present for the colour process to work. So yes you have to consider the level of ammonia in the product you chose or an alternative.

Hair colour still needs driver an engine in most organic or herbal colours the ammonia is replaced with either denatured alcohol. In some cases detergent derived products,they all serve to act as an alkaline.

Denatured alcohol is derived from grain fermentation this process produces alcohol and indeed bio fuel. this acts as the replacement for ammonia but because it’s derived from grain it’s classed as being Herbal natural. it’s your choice as to the organic route or not the process of lift and depsoit is the same as for permanent colour.

We are now flooded with adds marketing on so many Ammonia free products without any hint of the re placement chemistry or what it does!  So why don’t we question why do we trust!

This revolution is now already in many of the home colour kits that promote quick fix Ammonia free colour! is this really professional?

Thoughts on new MEA as engine to drive colour instead of Ammonia? MEA is derived from Ethanolamine !  also Denatured Alcohol used as ammonia substitute why does Ammonia get such a bad wrap just because it smells ? .

3. MEA has a larger molecule than ammonia, which means it is less volatile.

4. MEA does not give off gas when used in hair colour.

5. Ammonia gas is given off when used in hair colour.

6. Ammonia in small doses does not present a health risk.

7. Prolonged exposure of ammonia does present a health risk.

8. Many colours, including Matrix, use ammonia and monoethanolamine.

9. The argument that MEA has not been used long enough to be judged “safe” is completely

untrue, it has been used for at least 30 years in hair colour.

10. There is no proof that ammonia washes off the hair and that MEA does not.

11.Organic colour uses oleic acid in the formulation specifically to neutralise MEA, so even if the

colour was not washed off correctly, the MEA has been neutralised and would have no adverse

effect on the hair.

I hope that this article and indeed the one’s posted over the last two days pull all of this this huge topic together.from understanding the laws of Colour the colour wheel. The Ph scale and the role it plays and now finally Lift and deosit.